Adele with graph and wordcloud visualization

The last versions comes with some useful visualization features. The graph engine was already included and used for the basket analysis. But now the graph universe can be displayed in a graphical way.

For the visualization the jung library was used. There are three ways to display assozitaions between:

This type of visualization allows you to see the data in a very surprising way. Try it and detect “islands” in your associations. The meens you have found a completly separated group of data records.

The jung library comes with move and zoom mechanism. Try the doubleclick feature to select and export graph objects.

Another useful visualization the to one or more text columns of a table in a wordcloud. A tag detection to separated a complex text is available two. After some test with real data I’ve decided to include a zoom mechanism like known from Google Maps. 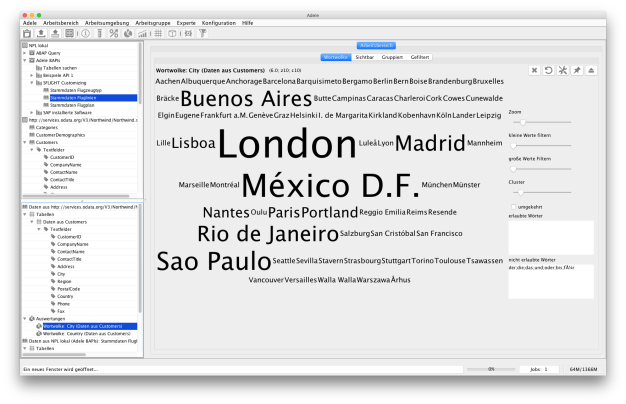 This feature allows you to deep into a wordcloud to detect the invisible secrets of your data. Filter mechanism and other features helps you to understand the data. In one of the next versions use of this wordcloud for clustering feature is planned.

Last but not least: the newest version has a import feature to read mindmaps in the freemind style (extension .mm). With this you can transform a mindmap hierarchy into a flat dataset. This can be very useful in business scenarios. Gretings to the developer Joerg Mueller. I’m a fan of freemind…

At the end a big sorry: in the versions before 0.33.o there was a serious bug included and the plugins could not be loaded. The import of data was not possible for that reason. Thank you for contacting me to help to find the error.